Everyone’s seen them or heard about them… But not everyone likes them. In the last year, there’s been a trend of naked women popping up in music videos, most notably in ‘Blurred Lines’ by Robin Thicke and Pharrell, ‘Tunnel Vision’ by Justin Timberlake and most recently ‘Bound 2’ by Kanye West featuring a very topless Kim Kardashian (although Seth Rogen unclothed in his and James Franco’s parody is way more entertaining). So what’s it all about? Noughties hip-hop saw booty-popping, thong-wearing ‘shorties’ in every video, but it was taken as just ‘what those people are in to’, and no one really cared. So is there much difference between this and full nudity? Is there a reason why people are getting all fussed and bothered over a few nipples – I mean, we all have them, don’t we (if you don’t have nipples, I apologise for the insensitive generalisation)?

The main problem with these videos is that they can be seen to be objectifying women. Critics have claimed that the topless women are just standing about aimlessly, exposing intimate parts of themselves and not doing much else, and are therefore in the video for no reason other than to look good and be desirable. But is that such a bad thing? Others claim the videos are empowering of women; that they are upheld and admired – appreciated for their appearance, yes, but otherwise not objectifying, derogatory or dismissive. A slightly different take on this is Miley Cyrus’ controversial ‘Wrecking Ball’ video, where Miley decides that the best thing to do, after slobbering over a few items of her toolbox, is to strip completely nude, therefore showing her vulnerability and the pureness of her lyrics. I think. Miley took it upon herself to do this to show how ‘broken’ (her own words) she felt about the song subject, showing her view of nakedness as an expression of self. In an extremely attention-seeking way. Not sure how she feels about the many parodies it has accumulated, though.

Miley Cyrus – expressing her feelings or a plea for attention? 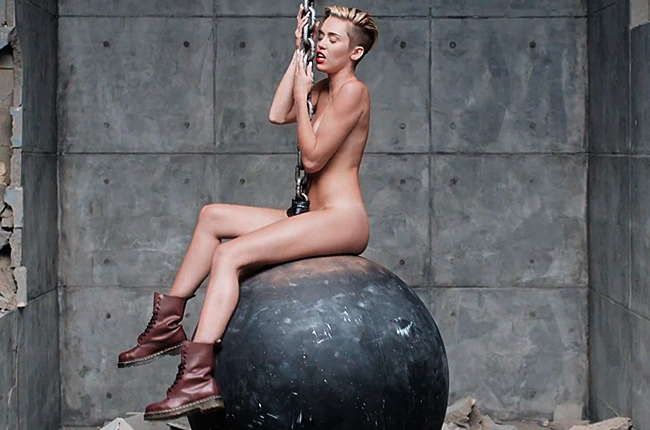 Undoubtedly there will be many differing opinions on this topic. Kanye West said of ‘Bound 2’, his newest and surprisingly absurd music video, that he wanted to make it took like it was ‘white trash’; it was supposed to seem really phony, and the only thing odd about the whole scene was the black man in the picture. So his video could possibly just be a statement about racism in America, and a topless Kim was just a part of his artistic vision.

Whatever way you look at it, it does seem like the directors of these videos are pushing the boundaries further and further, and video hosting sites are showing more and more explicit content. The maxim ‘sex sells’ certainly applies here, with the entertainment industry always out to make more money and create more of a shock factor – all press is good press it seems. Or just more views on YouTube. Personally, I think evening up the playing field is in order to counter the allegations of objectification of women – more naked men in music videos please. Preferably not swinging around on wrecking balls or licking sledgehammers though.