Roger Federer has been playing tennis professionally since 1998. That is the year I was born. All of memories I have, everything that’s made me who I am, have come in those fourteen years. Since 2003, which was the year I started school, Federer has been winning grand slams and ATP 1000s, breaking records, and generally becoming the greatest tennis player of all time.

This is an absurdly long career. Pete Sampras retired after fourteen years, Andy Roddick after fifteen. However, Roger Federer does not look on the way to retirement any time soon. Having won the Australian Open in January, which was his first grand slam title since beating Andy Murray in the 2012 Wimbledon final, it could maybe have been seen as a fluke. He hadn’t played a single competitive match since last year’s Wimbledon semi-final loss, two of his main rivals in the form of Murray and Djokovic had been eliminated in the earlier rounds. He was playing against Rafael Nadal; how could the old Federer not resurface?

But then last weekend, at Indian Wells, he bested Stan Wawrinka – a three times grand slam champion – to win the title. This is Federer showing he has figured out how to beat his old rival Nadal while also being able to adapt to the developing game in Wawrinka – who isn’t exactly young, but has found much of his success in the last five years or so. 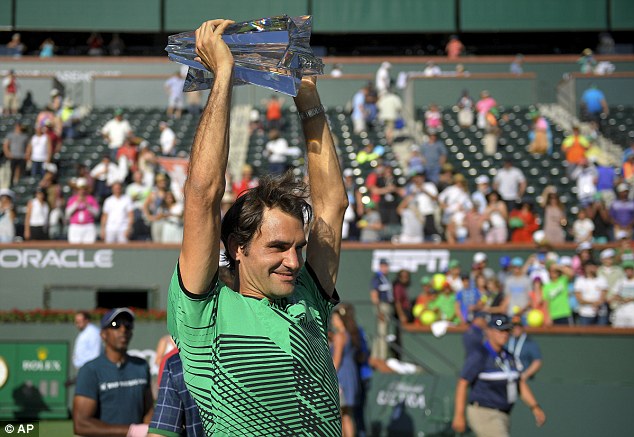 As you can probably see, Federer is in no shape to retire any time soon. So how on earth did he do this? How is has he reached the point where he will most likely play his twentieth year on the ATP world tour next year?

I have an idea that I’ve been contemplating for a while. For years, Federer was saying that he was going to retire after the Rio 2016 Olympics. With Murray beating him in 2012, you could understand why he might want to have another shot at that. He was turning thirty-six at that the time of this year’s Olympics, so if he kept himself in shape he’d have a reasonable shot at checking Murray and Djokovic’s egos at the point where they’d be taking over dominance of the game from him.

So you’d think, therefore, that maybe he’d be up for having one last shot at the Olympics and then if his knee was messed up, at least he’d gone out in a blaze of glory. But he held off. He said in an interview that if he intended to play a few more years, and he did, then he couldn’t put any more stress on his knee. He probably won’t make it to the next Olympics – although his career is already incredibly improbable. He gave that up for the potential of titles that are less well known than the Olympics but equally valuable to a professional tennis player, like Indian Wells.

I am hugely impressed by this. It is unsurprising that a thirty-six-year-old has shown such maturity, but you never quite know what it’s like inside a professional sportsperson’s mind. He’s won everything it’s possible to win. He’s got all the glory he’s ever going to get. But he still wants to win for as long as he can. He has been winning grand slams since I started education and I think, if he stays in this mindset, he might still be winning by the time I’m finished.