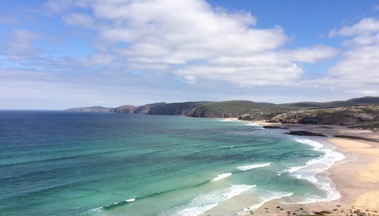 Throughout the year, Scotland is constantly undermined as a place to travel due to its tendency for bitterly cold temperatures and pouring rain. As summer arrives this couldn’t be further from the truth – in the sunshine, Scotland is idyllic and quite possibly the best place to camp in the world.

In the height of summer last year, I road tripped into the Highlands for four days with a car full of camping gear and blasting tunes, all set for adventure. Driving through the Cairngorms and further North still, the sense of freedom was uncontainable – the lack of trespassing laws in Scotland means wild camping is hugely encouraged and it leaves you feeling as if any loch or beach you come across is entirely your own.

With such a rich variety of locations in Scotland, we chose our campsite at random, heading as far north as possible until something took our fancy. Sandwood Bay stood out because of its iconic sea stack, Am Buachaille and its close proximity (a mere 6 miles) to Cape Wrath, the most north-westerly point of mainland Britain.

Sandwood Bay is inaccessible by car, which adds to the attraction of its seclusion, as only those who are willing to trek will reach the beach. The route was a relatively flat, 4 mile walk (about 1 ½ hours) around lochs and over hills and sand dunes, made slightly more difficult with camping gear to carry, but nevertheless it was a beautiful and pleasant way to spend the day.

Although the beauty of the walk was soon exceeded by the breath-taking natural splendour of Sandwood Bay, with pink hued sand and crashing waves which filled the silence of isolation. We arrived in the late afternoon and for the rest of the day and into the night, we had the entire beach between the three of us. The sheer bliss of being able to run freely down sand dunes and across the beach was quite unlike anything I’ve ever experienced before, this was remoteness at its very finest; no mobile signal, no transport and not even any other people. It was heavenly.

Being so far north, the sun didn’t set until past midnight so we had plenty of time to set up the tent, explore and build a campfire. Of course, being on a beach there was a severe lack of dry firewood (top tip: pack firelighters and wood for your stay) and so we resorted to lighting fire to the sparse grasses and shrubs, creating a rather underwhelming and short-lived campfire.

The next morning, we were awoken by the sound of waves breaking on the shore, again reminding us of how far we were from civilization and it was wonderful. We packed up the tent and headed for the cliffs above. As the boys headed towards the sea stack, I remained on top of the cliffs with the most incredible vantage point. In front of me was a vast expanse of Atlantic Ocean and behind, endless rolling green hills of the Highlands. The sun was high in the sky, the wind whipped around me I was completely alone with the elements.

To be that immersed in the wilderness is something only possible in Scotland, a country where all of the natural environment can be yours if you’re willing to seek it out. So this summer, explore Scotland as much as you can; swim in a loch, hike a Munro or camp at Sandwood Bay and you’ll remember it for the rest of your life.