According to the Oxford English Dictionary, art is ‘the expression or application of human creative skill and imagination’. The definition of art, however, has never been constant. Throughout history the definition has been repeatedly challenged and then redefined by artists. Modern artworks challenge the idea that art is not just the show of skill through the application of paint or the chiselling of a sculpture. 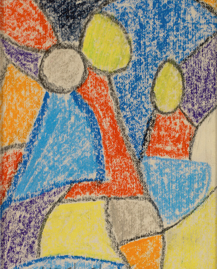 Some regard this as a trick question thinking the drawing on the bottom, despite being the more amateur of the two, was completed by an artist. As today we are prepared to accept that art is more than a mere demonstration of skill. The conceptual pieces of art often inspire the conversation of what can be defined as art, if art is not just a display of skill. Often the purpose of the simplicity of art today is to encourage its viewer to examine it beyond its face value.

Marcel Duchamp was a twentieth century French artist who famously challenged he world’s notion of art during the Dada movement. He did so by using what he called a ‘readymade’. This was an ordinary manufactured object which was chosen by the artist to become an artwork. Duchamp’s ‘Fountain’, (c.1917) (pictured below) was one of these readymade pieces: a factory-made urinal, which he submitted to the Society of Independent Artists in New York, signing it using the pseudonym ‘R. Mutt 1917’. We see Duchamp removing a functional object from its everyday surrounding and moving it into an art context, redefining the mundane object as art. Art critiques have contemplated the purpose of Duchamp’s readymades, questioning if they are a ploy of mockery or a way of establishing a new type of exclusivity for those who could ‘get’ this piece. Duchamp’s readymades paved the way for art to be less of a display of mechanical skill and more about the context. According to Duchamp, his readymades were “a form of denying the possibility of defining art”. But this form of art also encourages people to question the value we give to art. Whether that might be evaluating if art has gone too far, or if the value of art has nothing to do with the end creation as a physical object and everything to do with the subjective meaning we place onto it. His readymades were occasionally lost, in these cases Duchamp just replaced them with another ordinary manufactured object. This highlights that the value of the readymade cannot be found in the physical object itself but the questions inspires us to think about.

On the other hand, the art movement Photorealism considers art to be a display of mechanical skill. David Eichenberg’s painting below demonstrates the skill of creating a painting which is virtually indistinguishable from a photo. Some criticise photorealism for being a recreation of a photo without any thought, the pieces are a mere showcase of the artist’s talent. Some question why photorealists aim to create such pieces, why go to such lengths instead of just taking the photo. Marion Boddy criticises photorealist pieces saying, “nothing is left out, nothing is interpreted, and nothing [is] put in”. This suggests that it is Boddy’s own subjective opinion that art is cannot be defined as the mere demonstration of mechanical skill.

So, the next time you come across an artwork that seems questionable don’t be hesitant to be sceptical. The progression of art relies on artists and viewers alike challenging what defines art.