“Some men just want to watch the world burn”

A line used in the ‘Dark Knight’ to describe the insane mind of the Joker, but also one that these days seems to fit the so called ‘leader of the free world’, a certain President Donald J. Trump.

Unfortunately for the planet, this statement may have a more real meaning as President Trump has decided that the USA will withdraw from the Paris climate agreement.

So what is the ‘Paris climate agreement’ and why is it important?

For the first time in history an agreement has been drawn up to tackle climate change that will include every country on earth. The main aims of this agreement are to keep global temperatures “well below” 2.0C above pre-industrial times and it hopes to keep them below 1.5C (to put this in perspective we are already around a 1.0C increase), it hopes to limit the greenhouse gases produced by humankind to the level that trees, soil and oceans can absorb naturally by at the latest 2100. Each countries’ green energy and carbon emissions will be reviewed every 5 years and perhaps one of the most exciting points of the entire plan is a pledge from richer countries to provide poorer countries with ‘climate finance’ and green technologies to help them achieve these targets.

The effects of climate change are already becoming visible to ordinary people all over the world. For example, here in Scotland we are seeing wetter summers with milder winters, in colder climates such those heading towards the Arctic Circle, glaciers and ice coverage seem to be disappearing before our very eyes. So far none of these effects have put people’s lives directly in danger, but if you are a resident of a low lying country or an island, the threats faced by climate change are already a daily occurrence. In the Marshall Islands residents can already see their homeland beginning to disappear under the waves. Floods are now a part of everyday life, whereas once, particularly in the capital Majuro, decades passed between every major flood. The floods are polluting the islands fresh water supplies and washing away houses, triggering mass immigration of the Marshallese to the USA (ironically).

So far 148 nations have agreed to the targets set. The target is to get a total of 197 nations to sign the deal and we are well on our way to this. However, one major greenhouse gas producing nation has decided to turn its back on the deal, the USA.

Today, Trump’s America is responsible for 15% for all of the earth’s carbon emissions on its own, making it one of the most vital targets for reducing worldwide emissions. Without their signature on the agreement it is predicted that the world’s average temperature will be a whole 1.6C over the target set by 2100

President Trump hopes by pulling out of this agreement he will be able to reignite America’s dying coal industry, a key pledge of his election campaign which appeals to the central states known as the rust belt, a region where a lot of trumps voters live. However, currently in America the coal industry employs roughly half as many people as the countries solar energy providers, so this will be a major challenge for the new president, one which many economic and energy experts think he will inevitably fail at.

For other countries the lack of American involvement means a loss of access to one of the countries with the most renewable energy resources and technology, a vital part of the agreement for less developed nations. This may mean countries will go elsewhere to invest and purchase renewable tech, which could mean trump misses out on the jobs he has pledged to his supporters. One of the main contenders to take over this role is China, an increase in investment in the Chinese economy could potentially annoy trump even more, adding to his humiliation if coal doesn’t take off.

Unfortunately for now, President Trump and his government show no signs of changing their mind on this issues and remain fully against the Paris agreement, but in certain states and cities the local governments are rebelling against him and committing to the conditions and targets of the agreement themselves, so perhaps in time their pressure may force a change in policy, but for now the world will just have to fight climate change without the so called leader of the free world. 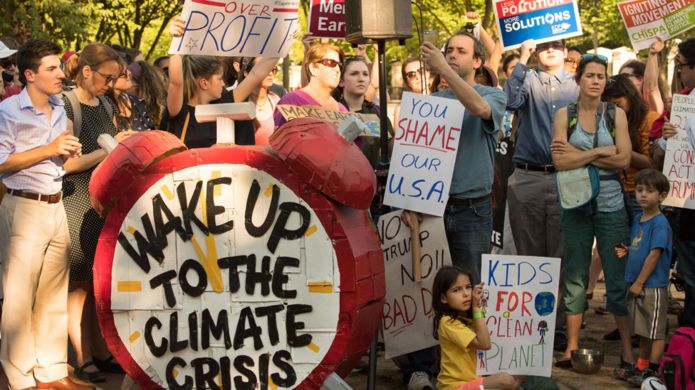 Protesters outside the White House (Image from BBC News)