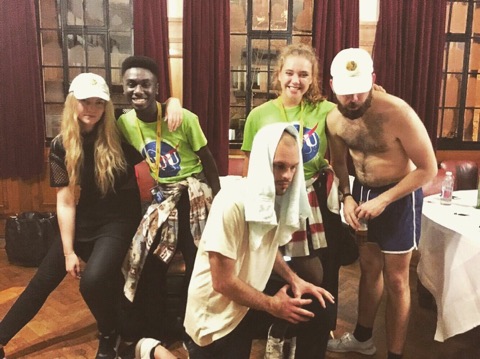 Last night, GUU was very lucky to host Swedish artists Neiked who played in the Debates Chamber as part of Freshers Week. G-You interviewed Ida Staxenius, Benjamin Johansson, and Mikael Rabus, who came to play at the gig.

Where does the band name come from?

That’s actually an excellent story. We’re a collective group of musicians from Stockholm, and one morning we came into the studio and one of the guys was just there, naked, and playing the flute, so it mostly came from him and we tweaked the word slightly.

What’s the best gig you’ve ever played, and how does it compare to playing to a student crowd?

Well, tonight was a sick crowd, definitely the best we’ve ever played, and probably the biggest crowd too.

If you could play anywhere in the world where would you love to play?

Actually, we’d like to have our own ‘Neiked Nights’ events, where we’d build from the ground up and invite people to come to us in Stockholm.

Who would you like to invite to these events?

We’d like to invite local artists, because we don’t come from big names, but really, we’d welcome anyone we think is cool. We want to find new, fresh talent, and that could come from anywhere.

What’s been the highlight of your career so far?

Coming from nothing, and creating something that we have found ourselves and succeeding in coming from an independent movement. Essentially, doing what we love, doing it on our own, and just having fun.

Is it hard coming from an independent movement?

In this business its very hard as it’s very controlled by the major names in the industry.

What are your influences when you’re making music?

All of us have our own music. Some of it comes from electronic and some from bands, we don’t have boundaries and we don’t want to put ourselves in a box. Even though we aren’t into pop music, we make pop music. Many other major names didn’t like Sexual, but we like it because of its baseline. When we like what we hear, then we go with it.

How easy do you find it to interact with different types of crowds?

I find it really hard to relate to DJs and live acts who stand and don’t even look at their crowd. It’s a party for us too, we want to hang out with you. It doesn’t feel like we’re the artist and you’re the crowd, it just feels like we’re all just having fun.

What’s the most embarrassing thing that’s ever happened to you at a gig?

I don’t know why, but a Tech/House club in France booked us, and he really didn’t like our music, he wanted us to do Tech/House music but we wanted to play our set, the music we like. He said that the house DJ would take over from here, which was his personal way of kicking us off stage. They wanted one thing and we aren’t just one thing. It wasn’t really embarrassing, more awkward.

What’s your drunk-food of choice?

No chips and cheese for you then?

Ida really likes it, we have it in Sweden too.

Who’s the biggest party animal out of your group?

Out of the entire group, back home included, probably the guy we found naked in the studio- he’s f**king insane, but he’s amazing.

And between the three of you?

I think we trade off, if one of us is drunk the other two take charge of the situation, we have a good dynamic.

What does the future hold for you?

A lot of new music, a lot of big records, we’ve been trying to get the USA to understand that artists can be a bit different. We’d like to break into the USA, with new music and new features from unknown artists, trying to work with people we like, too.

What do you think is in a Pint of Fun?

Ida: Tequila can make anything happen, so tequila

Benjamin: I think shots of vodka

In a Pint of Fun there are actually two shots of vodka, a VK, and it’s topped up with lemonade, does that sound like something you would drink?

Will you be coming back to Glasgow?

Definitely! We’ve been to a few gigs in Perth and St. Andrews, but we want to come back to Glasgow, and check out the night life.