G-You was very excited to meet with Graeme Macrae Burnet, former Glasgow University student and author of The Disappearance of Adele Bedeau (which received the New Writer’s Award from the Scottish Book Trust) and His Bloody Project which won the Saltire Society Fiction Book of the Year Award, the Vrij Nederland Thriller of the Year Award, was shortlisted for the Man Booker Prize and the LA Times Book Awards and is now published in several countries around the word. Graham is launching his newest novel, The Accident on the A35 in just a couple of weeks time! 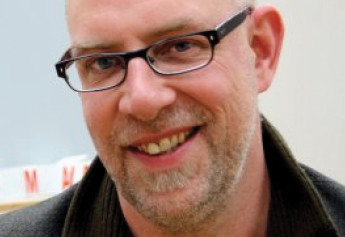 As you also studied at Glasgow University, can you tell us a little about your student life here?

I always loved studying. I came to university very young, only 17 and would say I was quite a ‘geeky’ student. I was always engaged and eager to learn. I’ve always associated Autumn with starting new projects and starting university fitted into this. In terms of my subjects, I loved the contrast between the traditional English department of Glasgow University and the newness of the Film and TV department.

Did you ever write for any student publications at UofG?

No, I was always too shy to join a student publication. I never thought I had the temperament for journalism.

Was there any particular inspiration which made you want to become an author?

I wrote short stories at school and really enjoyed creative writing back then, even though the phrase ‘creative writing’ didn’t really exist back then.  Former Glagow University professor Hunter Steele had a box where you could leave your work and come back a week later and he’d have read it an annotated. It was a terrifying experience because I had never shown anyone my work and he was a real writer, I don’t think I’d every met one before that. After some encouragement from him I entered a short story competition for Glasgow and Strathclyde students and my story won. He asked me if I’d ever thought of getting and published or approaching magazines, and that encouragement of ‘you can do it too’ was really important for me.

Do you have any advice for aspiring authors?

The good thing about writing fiction is that shyness is no barrier, it might even be an advantage. The internet is full of advice for aspiring authors, but my advice, while it might sound a bit flippant is don’t read them, ignore that s***, its often written by people who have never written anything. The serious side is that you have got to find your own way. Just write and finish things, and give them to people to read. Get feedback on them by asking specific questions so that you get honest opinions. Identify what you think is wrong with the story and ask them for their opinion. I’ve never been to a creative writing class or workshop, and while I’m sure it can be useful, but it can also be overwhelming because you have too much stuff in your head, and it becomes not unique to you.

What is your biggest achievement as an author so far?

The biggest achievement is finishing a book. That is actually what you achieve. Don’t get me wrong, its nice to have my work shortlisted for awards, its amazing, but the achievement is finishing it. I like all my books equally, and even though His Bloody Project got all the attention, I often have people saying ‘I’m sorry, but I actually preferred your other book’, and I like that, I like to hear people’s opinion.

Which book have you enjoyed writing the most?

Well, theres a slight misunderstanding when you use the word ‘enjoy’, because, like most writers, I really loath writing. It’s a horrible, painful process which I have to force myself to do. Actually the easiest was His Bloody Project because of the idea behind it and the structure. The others may seem much more simple, but they actually have much more complex structures. I struggle everyday to make myself write, but the last book has been the hardest because I have a situation and characters, and I’m trying to find the story, rather than having it in mind before.

How did you go about finding research for His Bloody Project?

Lots of ways, talking to people from the highlands, use of the National Achieves, old documents, reading actual psychiatric reports from prisons. I worked as TV researcher in the past so I have experience in this. But from the very start I kept note of the words Roddy would use, it was important to use colloquial language because it was in first person. It’s important for the authenticity. It’s all about the language. One word, especially with something historical, can throw you out of the illusion.  I used a 19th century dictionary to check they were in use at that time. A guy even wrote to me to comment on the fact the word ‘vendetta’ would not have been used in the time, although we found out it came into use in the 1850s, and educated lawyers would have used it.

Is crime and thriller novels what captured your attention?

Do you take inspiration from other authors?

I talk a lot about Simenon, a Belgian author whos written over 200 novels and wrote them each in 11 days. He’s got an amazing style and he’s brilliant at setting a scene in a minimal number of words, so he’s an inspiration but it’s got to become your own thing. For me, its important to have them set in real places with real people but with my own fictional take on things. The reason you like something is because it speaks to you, you read it because you like it. I think I have a similar sensibility to Simenon, but it’s not that I’m taking that idea from him.

On a completely different note, what was your favourite childhood or teenage novel?

I wasn’t a huge reader as a child. I don’t think until recently I was ever asked about childhood book, but there was this one in my grandma’s house called ‘Mr Papingay and the Little Round House’ and if it was reprinted now, the language would certainly be edited because it contains some unsavory language. But I came across ‘The Catcher in the Rye’ and it just caught me, it’s such a teenage boys book. I was immediately struck as I didn’t know books could be about me or speak to me. From there it became my thing, it was an alternative universe to my small-town home of industrial Kilmarnock. So it was very important to me at that time.

When was it you wanted to be a writer?

Well it’s hard because it’s one of these things people say ‘I want to be a writer’ but you have to ask what they want to write. You can’t want to be a writer, you have to want to write and you become defined as a writer when you have written and published an amount of work. I had no intention or becoming a writer, but I was writing these stories back when Hunter Steele encouraged me to share them. But I suppose it goes back to my teenage years, leading into becoming more involved in literature.

Did you have a lot of knockbacks before you got your work published? Was it disheatening or did it encourage you more?

I wrote a novel in the 1990s, which was quite generic and set in a thinly disguised Kilmarnock. It got a bit of interest, but was never published and now I’m happy that it didn’t. I started a few others in the interim, but with Adele Bedeau it was turned down by 15 publishers, so I’ve had my share of knockbacks. I did a big rewrite of Adele Bedeau and it got sent out and was rejected. At that point my agent exhausted the avenues so I took it indecently to a number of publishers and one of those was Sara at Saraband, who said yes very quickly by the standards of publishers, which was great. Was it disheartening? Yes, for a period, you see other people getting their work published you at times you think ‘that’s sh*t’ and you know yours is good if an agent takes you on. It does feel bad, but I also knew it must be half decent because we worked so hard on it. I had the experience of the reality of what its like to be a novelist, e.g. you still have a day job. His Bloody Project sold very modestly for months until it was reviewed by some bigger areas and the reviews, modesty aside, were really very good. When the book starts getting published abroad, it’s just mind-blowing. People were sending pictures to me of it in Nepal and Romania (I didn’t even know it was published in Romanian) and its like ‘well f***’, it’s sustained a life beyond not willing the Booker Prize and its given me a lot of encouragement to finish this new book and get it published this year.

Are you excited about your new book and seeing it on the shelf?

I am, but there’s an element of anxiety too. It’s going to get a lot more attention. As I’ve said to Sara (my publisher) it’s a little book, the scale is small and the structure and narrative is different. That doesn’t mean to say it’s a lesser book, I love little books, it gives the reader the chance to explore it for themselves more. But it’s what I want to do. It’s an element of both excitement and nerves, but people seem to be interested. Apparently, it’s really funny? I didn’t think it was in the least bit but it seems I’ve written a bit of a comedy… so I’m looking forward to seeing the reactions.

Thank you very much to Graeme for carrying out this interview with us.