G-YOU: Who came up with the idea of Massaoke? Where did it come from and why do you think it works so well?

Massaoke: Massaoke was dreamt up by a group of friends in a pub in a basement in London. It works really well because it’s a universal thing, it brings people together and it is something that is inherent in all of us, it’s just everyone getting together and having the most fun they could possibly have.

It works so well because do you know what, singing is really really good for you. Especially in the olden days people used to sing all the time in groups, and especially singing in groups is really good for you – like scientifically it produces oxytocin which makes you feel good, it gets more oxygen to your lungs and blood pumping round your body. Physically its good for you but mentally its really good for you too. People used to sing in church a lot more than they do now, and round the piano in a pub, and that’s kind of gone away so actually having somewhere where no-one’s judging you you’re just singing in a big crowd and it’s got that euphoric thing. The only other place that really happens is at a football stadium or at a big gig, but this is all about the audience, it’s not about the band it’s about the audience being part of the band. 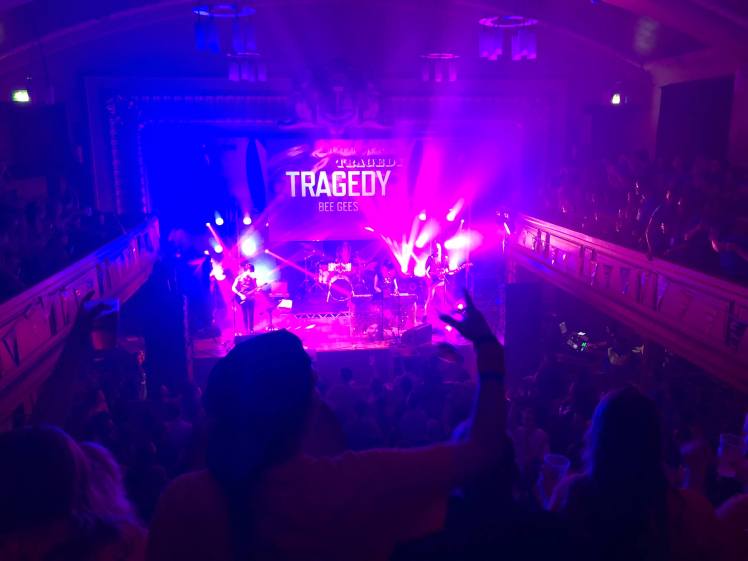 G-YOU: About yourself now, what’s the largest gig you’ve played with Massaoke?

M: Probably was at the rugby in Twickenham, it was huge, there were like, tens of thousands, I have no idea how many there were it was just like so vast you couldn’t count.

G-YOU: And in front of crowds that large when you’re playing other artists songs do you ever get nervous?

M: Not so much actually, if you know the songs then that’s okay, I’d only get nervous if I felt like I didn’t know the song enough.

G-YOU: Has there ever been a time where you’ve really messed up on a song, and if so what happened?

M: Err, it might be playing something in the wrong key and not being able to hear myself in the monitor so not realising. It would sound absolutely horrific to the audience. The thing is you’re only as good as your mixer really because if you can’t hear what you’re doing you’re just hoping.

G-YOU: What song really gets the crowd going?

M: I mean, all of them! They’re all very carefully chosen so you can’t help but sing along to them. Bohemian Rhapsody has got to be the one, we tend to end the sets with it because you can’t really top it as a sing-along.

G-YOU: Are there any songs where you think you guys play it better than the original?

M: Ooh that’s difficult. I love playing with this band because they’re all such good musicians, am I allowed to say all of them?

G-YOU: Downstairs in Beer Bar we have a jukebox, we give you three tracks, what are you putting on to get everyone in the bar singing along?

M: Okay, I think I would put on Queen, erm everyone singing along.. A Little Respect by Erasure. That gets everyone going and I’m surprised it’s not in the set list. I’d also say Respect by Aretha Franklin, double respect.

G-YOU: If you could do karaoke with anyone in the world, alive or dead, who would it be?

M: Alive or dead? It has to be Freddie Mercury.

G-YOU: What song would you do with him?

M: Oh it could be not even one of his songs! Imagine doing Stevie Wonder with Freddie Mercury, that would be amazing, any Stevie song actually. Do you know what I’d quite like to do karaoke with Stevie too, can I have two?

G-YOU: So it’s Fresher’s week, we ask this to everyone, do you have any advice for Freshers coming in on either pursuing their dreams of performing on stage or just coming to university?

M: Yes, don’t change who you are to fit in with anyone, be confident in yourself, try not to get TOO drunk, my freshers week – I don’t really remember it, and be safe kids. And work hard at what you do and have a goal and work towards it, but don’t be afraid of changing your goal as you go along, be open to things and surround yourself with people you trust.

G-YOU: Final question and this is the hardest one of all, would you rather fight a hundred duck-sized horses or one horse-sized duck?

M: A hundred? I mean are they fighting horses? Biting? I need more information here!