The following is an interview between Danielle Rowley (Labour MP), Douglas Ross (Conservative MP), Stewart McDonald (SNP MP), Owain (Convener of Libraries, Co. Editor-in-Chief) and Bethany (Politics Editor). It was conducted after the Freshers’ Week Show Debate, where each of the politicians were speaking.

We have split up the interview into three distinct segments; on getting into politics, on Brexit, and on Northern Ireland (since many of our members are from the province). We will release one section a week over three week, so make sure you like our Facebook page to be updated on the rest of the story!

The following views are not that of the Union but of the individual, or the party they represent. 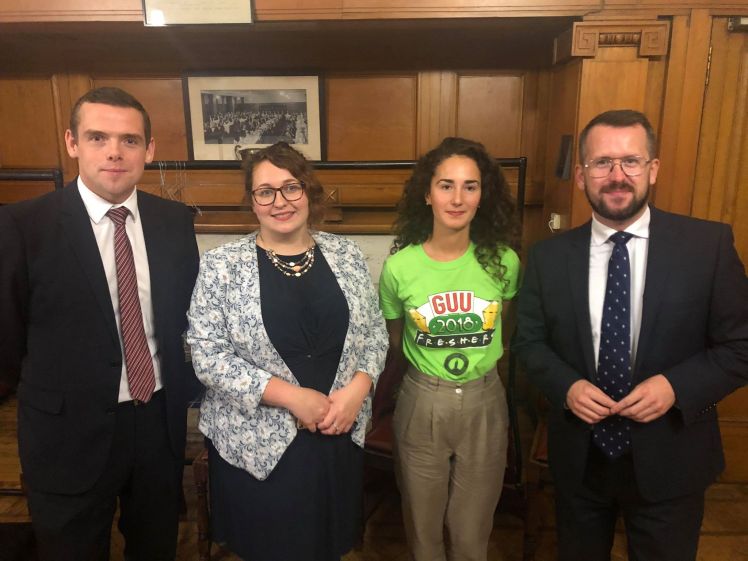 Bethany: What can you do as an MP to empower young people?

Danielle: I chair the all-party parliamentary group for votes for 16 and I think that votes at 16 are hugely important. I think that 16-year olds should be able to vote across the UK, at all elections, but I also think just as an MP, encouraging your young constituents to get involved in things, having youth events, having young peoples’ surgeries – and of course, if there was better political education in schools then that would engage people as well.

Danielle: I think that there is a lot of things that happen, and you have a lot of rights when you are 16, you become an adult in a lot of areas of the law. There are some things like smoking and drinking, but everything you do at 18 involves some kind of risk or health hazard, it is also a private right in voting for public right which most of all happens at 16. So, you know, you can get a job, you can get married, you can have your own house, you can do a lot of those things at 16, so I think that’s why it is an important age.

Douglas: I think that it is important that you show people that they can get involved in politics at a young age, not just student societies etc, but even elected for national parliaments. You have got Mhairi Black for the SNP, Danielle is under 30 in Labour, Scottish Conservatives have Kirstene Hair as well. So, there is a lot of young people in parliament now, and when I was first elected to the local council I was one of the youngest local councillors. And I think, it’s to show that they can have a voice at local and national government and at all levels as well. The other thing I would say is to show that you have a life outside of politics, because we all do different things to get through and make that human connection – So, I am involved with football, and young people that speak to me about football that move on to doing politics, I think is very encouraging.

Stewart: Yeah, I think that there was an important point that makes us to show that there is more to politics than politicians and just politics; if you can seem like a normal human being or as close to a normal human being as possible, that helps. And I think, kinda, like I was saying earlier in the debate: if you want to get involved, just get involved, and if you want to get to a point where you are going to stand for election, stand for election. People will help you if you join a political party, if you do different things, you meet different people, there is to become a councillor, an MSP, an MP or whatever it is that you want to do, just go and do it. Don’t let the fact that it is general stuffed with old people put you off.

Bethany: What is the best way to get your voice out there as a young person and to really make yourself be heard and interact with politicians?

Stewart: Well, you have got to do what everyone else has got to do. You have got to know what it is that you want to say, what it is you stand for, what your ideas are. If you have got good ideas, people will vote for you, people will back you, people will listen to you. But ultimately, you’ve just got to make sure that you’re heard. Politics is full of people who love to shut people down, and it does take a bit of a fight sometimes to get your point across, to get your ideas across, and you’ve got to be willing to do that. There is no getting away from it. Just don’t be afraid – there are people that will support you and make sure that you’re given that opportunity.

Douglas: I think just be passionate about your argument. Don’t go in there assuming that as you’re a young person, people will want to do what you are telling them to do. You’ve actually got to be able to convince them, and by doing that, you will have a stronger argument yourself. So, it is to try to ensure that you don’t just think that you will get your own way because you are young people. Try and have an impact regardless of whether you are young, male or female.

Danielle: Get involved in any kind of groups, local organisations that you can: your community council. I was in in The Scottish Youth Parliament when I was younger, and that was a really good way of getting to local politicians and expand your knowledge on things as well. But also, just being aware and active and knowing what is going on and then finding opportunities to get involved.

Douglas: Don’t squander this opportunity. I look back, I went to Agricultural college, I got my degree through The University of Glasgow, and that was 14 years ago. And I was driving down here today thinking that actually I wasted a lot of my time in university. Do the fun stuff but also remember this is your one opportunity to propel you into your future career.

Stewart: Yeah, the same thing, don’t waste it but enjoy it at the same time and don’t be worried if you get to the end of it and still don’t know what you want to do. I don’t know what I want to do when I grow up either. There is a big world out there.