For many years, women have been largely overlooked in science whether it be their contribution to scientific discoveries or scientific professions. Conveniently whilst visiting The Surgeons Hall in Edinburgh I stumbled upon a temporary exhibition called ‘Field Notes: Reflections of Camp Life at The Scottish Women’s Hospital.’ Here I came across the incredible and selfless story of Dr. Elsie Inglis.

Elsie Inglis knew she wanted to pursue a career in medicine and fortunately she was able to begin her medical training at the Edinburgh School of Medicine for Women which previously to this woman were not allowed to study or gain a profession in. However, due to a student rebellion Inglis transferred to the Medical College for Women, a rival school set up by Inglis with the support of her father and his influential friends.

Inglis was nearly 50 when the First World War was declared but her passion and enthusiasm for medicine led her to offer her services to the War Office which was declined. Not deterred by this she wanted to form independent hospital units staffed by women in her aid to help the war efforts. Her appeal for funds most notably given in the form of an inspiring speeches titled ‘What Women Can Do to Help The War’ attracted a lot of support including the Suffragettes after which the Scottish Women’s Hospital for Foreign Service organisation was set up. France and Serbia were the first countries to accept the offer of all female medical units which led to 14 units of women volunteers leaving the safety and comfort of their own homes to help soldiers on the front line of all nations.

From this, Inglis became the first women to be decorated with the order of the white eagle, Poland’s highest order awarded to both civilians and military for their merits. Among this Inglis was already qualified as a licentiate of the Royal College of Physicians and Surgeons, Edinburgh and a licentiate of the Faculty of Physicians and Surgeons, Glasgow, both of which are significant academic acknowledgments in a time were women in medicine was scarce.

Unfortunately, Inglis knew she had cancer and so had to stop her work as a surgeon but for a period of time she continued to direct the units. Upon her return to the UK, Inglis passed away on the 26th November 1917. The remaining funds from the disbandment of the Scottish Women’s Hospitals for Foreign Service were used to establish the Elsie Inglis Memorial Maternity Hospital in Edinburgh in July 1925 which is now closed after it was transferred to the Eastern General Hospital but for a period was still used as a private nursing home.

Inglis’s determination and enthusiasm to not only science but also towards helping others demonstrated that women were more than capable to work in a scientific profession just as well as men. 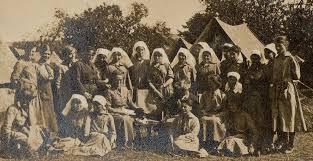