I could tell you my closest friends’ drunk-walk-home chippy order, their opinions on Brexit, and what type of pizza they are according to BuzzFeed, but I wouldn’t be able to get a syllable out about their view on death.

For me, Death has a scythe. Style is everything, in that job.

Maybe it’s not what you want to read in a student magazine, but I’m going to die. And if you’re reading this, you will, too. Don’t worry, it’s perfectly normal. Hopefully, it’ll be decades away, and we’ll have had time to think of some really good last words, like Voltaire, when asked to renounce Satan replying, ‘this is no time to be making new enemies’. There’s a man who appreciated style.

It’s natural to worry about death, to be confused, or w 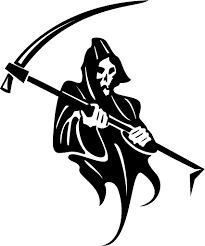 ilfully not think about it (if that’s the case then you’re reading the right article).

So how often do you talk about death? Or perhaps the question is how do you talk about it? Until the age of ten, I couldn’t bear the thought of sickness or death, to the point that when the topic came up I’d leave the room, even if it was simply a conversation about a stomach bug. Tricky, since my parents both worked in hospitals.

Now, many years and several funerals later, the conversation crops up from time to time, but nothing like as often as conversations about whether to buy OJ with or without bits. Does this make me qualified to write about it? Maybe. Maybe not. But I’ve yet to find someone with much in the way of ‘experience’ of death, so I think I’ll keep hold of the mic for now.

The discourse surrounding death in western society is bizarre (read: stiff upper lip). We see death all the time in films and TV shows (looking at you, Game of Thrones) and yet rarely is there much time given to show the natural human reactions. We don’t see the tears, the grief, and we don’t always recognize it when it brings a lump to our throat and a stiffness to our face from determinedly NOT CRYING. And suddenly, after years of looking the other way, and avoiding the topic, we have no idea how to deal with the aftermath of the death of someone close to us. And no idea how to help those who are going through it

Even if you opt out of the whole ‘society’ thing and live as a hermit, you’re likely to get attached to a small creature, and eventually you’ll outlive it and all of a sudden you’re sobbing over Gerry the Dormouse. Humans form attachments. And then it really hurts when part of the attachment is gone.

Coping comes in many different forms. A good friend of mine has started painting trees blue after his friend committed suicide. It was something his friend used to do. So, for hours in the baking Southern Hemisphere sun, he and a couple of others laboured away to paint one enormous, leafless tree bright blue as a tribute to someone he’ll never see again, and a way of raising the issue that we don’t talk about death and grief and emotions enough.

People’s way of dealing with death varies wildly, and perhaps the only ‘normal’ reaction is, in fact, to react – in any way. And if it’s something you’re struggling with, asking for help, or articulating that feeling is really hard. And really important. And if you’re watching someone struggling with grief or death or anything, really, often you don’t need to say anything. Lots of people worry about saying the wrong thing, but I think the most important thing is to make that person know you’re there for them. So if you don’t know what to say, be the person who brings round a lasagna and a bottle of wine and offer your time instead.